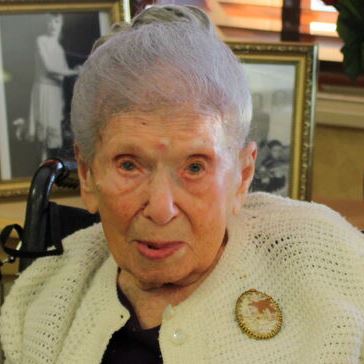 Goldie Steinberg (née Chatzkel) (30 October 1900 – 16 August 2015) was a validated Moldovan-American supercentenarian. She currenty holds the record for the oldest Jewish person ever, and was the sixth-oldest validated living person at the time of her death at age 114 years, 290 days.Goldie Steinberg was born on 30 October 1900 in Kishinev, Russian Empire (now Moldova). She is believed to be the last survivor of the Kishinev pogroms in 1903 and 1905. Her father's name was Reb Chatzkel; he worked with iron and would send it to a factory in Tula. In 1923, her uncle Max, a successful businessman residing in the United States, brought her and two of her sisters, Sarah and Raizel, to the United States. She worked in a factory that produced girl's dresses and was professionally a seamstress until the age of 80. Goldie married Philip Steinberg, a fellow Kishinev native, in 1932. He worked as a jeweller until he passed away in 1967. They had two children, Don Sargent and Anne Teicher, both of whom were alive as of Steinberg's 114th birthday. She moved to a nursing home at the age of 104. Goldie Steinberg passed away on 16 August 2015 aged 114 years, 290 days. She was (and still is) the oldest person ever born in present-day Moldova.
Country: USA
Na@Na