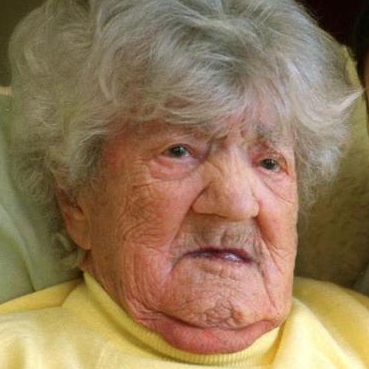 Eva Morris was the oldest recognised person in the world, by the Guinness Book of Records from December 1999 until November 2000. She was a native of Stone, Staffordshire, England.Morris attributed her longevity to whisky and boiled onions. She was said by friends to enjoy the occasional cigarette and to have ridden a bicycle. She worked as a domestic servant and was widowed in the 1930s. Morris lived in her own flat until she was 107, when she moved to a nursing home after a chest infection. Her only child Winnie died of cancer in 1975 at the age of 62. Morris died in her sleep at 1.25 am on 2 November 2000, aged 114 years, 360 days, at the Autumn House Nursing Home in Stone. Following her death, Marie Bremont of France became the world's oldest verified person. There had been claims that a Dominican woman, Elizabeth Israel, was 125 years old, but the Guinness Book of Records said Morris had taken the title because her date of birth could be fully authenticated.
Country: United Kingdom
Na@Na