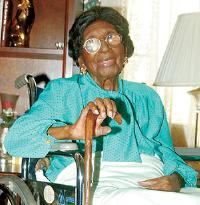 Bettie Wilson was an American supercentenarian who, at the time of her death, was the third-oldest person in the world, behind Maria Capovilla and Elizabeth Bolden. Bettie Antry Rutherford was born on 13 September 1890, in Mississippi, the daughter of slaves, she was the youngest of nine siblings. Growing up, she had little formal education, and taught herself to read and write. She married Rufus Rogers, and the couple had a son before Rufus died. She then married the Rev. Dewey Wilson in 1922, and the couple had 2 children.