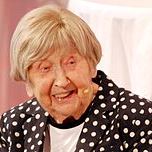 Dagny Valborg Carlsson, is a Swedish blogger centenarian. Carlsson who calls herself Bojan on her blog, started working as a seamstress at a factory at a young age. She would later study at a textile institute in Norrköping. At the age of 99 years she went to a class in computing to learn more about it, at the age of 100 she became known in media for her high age and her blogging. On the question about what makes a long life she has answered good genes and curiosity. She has participated in several TV-shows such as TV4:s Nyhetsmorgon, SVT:s Fråga doktorn, Gomorron Sverige and the SVT documentary series Det är inte så dumt att bli gammal. She has also been a guest in the Nordic talk show Skavlan on 4 March 2016.As well as TV4:s Bingolotto game show. In 2016, Dagny Carlsson had a small role in the film "Hundraettåringen som smet från notan och försvann", in which she played an elderly woman who has moved into Allan's old room at the retirement home.
Country: Sweden
Na@Na