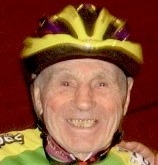 Robert Marchand is a French centenarian cyclist. Marchand was born in Amiens, near the frontline of the First World War. Marchand was a firefighter in Paris in the 1930s. He was a prisoner-of-war during World War II. He then moved to Venezuela, where he was a lorry driver and sugarcane planter. In the 1950s he went to Canada, where he had a job as a lumberjack. He returned to France in 1960 and worked as a gardener and wine dealer until 1987. He took an active part during the strikes of 1936 in France that gave birth to the modern era foundations of French employment legislation. Aged 35 he finished seventh in the Grand Prix des Nations in 1946. He returned to cycling in 1978 and continued training after his 100th birthday. On 4 January 2017, he set a world record in one-hour track cycling in the over-105 age group, covering 22.547 kilometres (14.010 mi) in one hour, and the 105 years old centenarian declared: "I could have done better, if I had seen the 10-minute warning card, otherwise I would have pedalled slightly faster". At the age of 105 he was recognised as the world's oldest competitive cyclist by Guinness World Records.a
Country: France
Na@Na