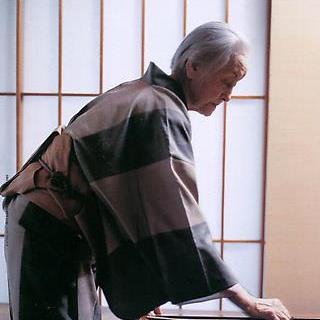 Shinoda was born into a wealthy family in Dalian, Manchuria, where her father managed a tobacco factory. Two years later, her family returned to Japan. Influenced by her father's love of sumi ink painting, calligraphy and Chinese poetry, Shinoda practiced calligraphy from the age of six. In 1940, Shinoda had her first solo exhibition at Kyukyodo Gallery. She began working on abstract paintings in sumi by 1945.Shinoda traveled the United States from 1956 to 1958. She came into contact with the works of Jackson Pollock, which left a deep impression on her. She moved beyond traditional calligraphy towards an expressive, abstract style. During her time in the United States, she had a number of exhibitions, which helped to make her name. Her works were bought by a number of high-profile collectors. Shinoda also became involved in the abstract expressionist movement of the time. She returned to Japan and continues to work. She turned 100 in March 2013.She has remained unmarried and considers herself as married to her work.
Country: Japan
Na@Na