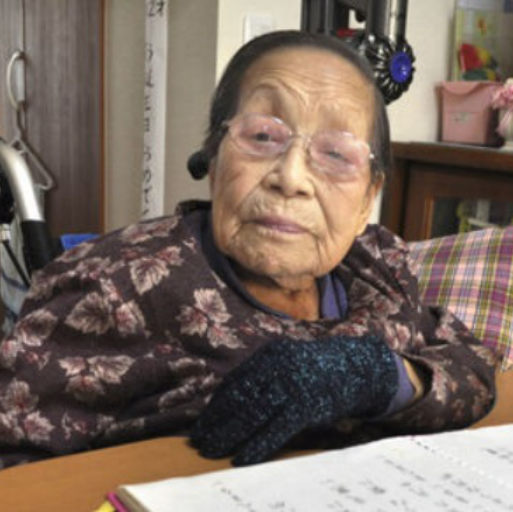 Motome Hirata was born on 12 August 1906 on a farm in Ueda, in central Japan's Nagano Prefecture, Japan. At some point of her life, she started drawing and writing haiku. After graduation, she started working in the fields, selling silk, raw silk and started doing both weaverding and sewing. She got married at the age of 25 and raised six children. She married into a family of silkworm breeders right when raw silk prices collapsed in the aftermath of the Great Depression. Struggling to make ends meet while raising four boys and two girls, she regularly worked from dawn to dusk. Although Showa was a period of intense work, Hirata said her life changed for the better during the Heisei years, starting in 1989. She started participating in tanka poetry club readings and developed a passion for drawing, among other hobbies. She moved from Nagano to Chiba, where she currently lives in an apartment with her daughter who is 74. Asked about Reiwa, which is the first of Japan's imperial eras to be chosen from a traditional work of Japanese poetry, Hirata said, "It's wonderful". Expressing hope for the new generation and the new era beginning on May 1 with the ascension to the throne of Emperor Akihito's son Naruhito, Hirata said, "I want the world to become a better place. On her 103rd birthday, Hirata was asked for her secret of longevity, to which she responded: "Eating is also important, but moving of the body always leads to health."
Country: Japan
NA@NA