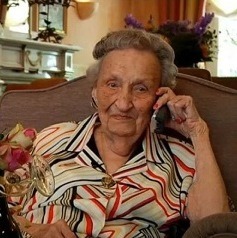 Anne Brasz-Later was born in Goes in the province of Zeeland, Netherlands on 16 July 1906. She gave birth to her first child Hendrik Brasz in 1933 (who now lives in Australia). A year later, in 1934, her first daughter Elisabeth Cummings was born (who moved from Portland, Oregon, USA, a couple of years ago) and two years later, in 1936, she gave birth to her last daughter and child.

At age 3, Mrs. Brasz-Later moved to Indonesia (then the Dutch colony 'Dutch East Indies') and lived there for 40 years until she returned to her native country in 1949, at age 43. In her later years, she moved to an apartment near a retirement home in the city of Utrecht. Despite avoiding the media to talk about her age, her daughter Elisabeth stated that Brasz-Later, at age 110, was fine, still remembered most things very good and, if it was possible, that she planned staying here for a while. On 16 July 2018, she celebrated her 112th birthday. This made Kuijntjes and Brasz-Later the first two Dutch supercentenarians who were both alive at the age of 112.
Country: Netherlands
NA@NA