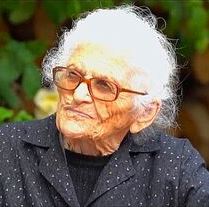 Katerina claims to be born in the village of Mountriza (present-day village of Gryllos), Elis, West Greece, Greece on 25 July 1905. Her parents were Panagiotis and Theodora. At the age of 25, she married Sofoklis Karnaro in Krestena. After marriage, she moved to the Krestena. She worked in the fields. Her son, Leonidas went to the Navy and became Grand Captain. She also had a daughter who passed away before 2018.

In April 2018, Katerina had three living daughters, Lambia, Sofoula and Theodora, 7 grandchildren, 8 great-grandchildren and one great-great-grandson (1 year old at that time). She had a foot surgery prior to her interview in April 2018. Katerina said that she don't know how old she is: "I have to be around 105, but I do not remember well". Karnarou currently lives in Krestena, West Greece, Greece.
Country: Greece
NA@NA